This is my 3rd (and likely final) post on the pandemic. My motivation for writing just about anything is largely driven by my own need for understanding. Like most of you, what I understood about Covid’s impact on me personally, my community and the rest of the world has drastically shifted since this past summer. The basis for this shift has less to do with what I’ve seen on the news and more to do with the data I’ve tracked and the circumstances of my immediate surroundings.

In my June post, I reasoned that the percentage of people infected did not rise to the level of hysteria we were seeing in the media. At the time, less than 1% of our population had been infected (.74% of Americans and .55% of Tennesseans). Five months later, however, those figures have increased five and nine fold respectively (4.02%US/5.15%TN). Locally, my own county’s rate increased by 55 times the initial rate (.08% to 4.40%.)

Total cases as of today exceed 13 million. Like the national debt, such a figure holds little meaning without context. So here’s some context: Two million of those cases materialized in October. In November, that figure doubled to four million. What’s more, news reports indicate that hospitalizations across the country have doubled since November 1st to 90,000 patients.

Until last month, I knew of very few people who’d tested positive. Of those I did know, all had very mild symptoms. Now, I’ve lost count of the people I personally know who’ve had it. I can no longer reassure myself that those who get it experience mild or no symptoms because I know too many people who’ve suffered horribly. I have no doubt that certain loved ones will suffer even worse if they contract Covid.

I’m not trying to scare anyone with data. When this all started, we had very little information and worse, no idea of when it would end. Now we know so much more and we have the hope of an end in sight with the pending rollout of multiple vaccines. It is worth noting that the data does still indicate that most people who contract Covid will recover without problems, but we cannot allow that to numb us to the suffering of others (something I’ve been guilty of).

What I am trying to do is arm myself (and others) with information that will enable me/us to make better decisions. For me, that is going to mean increasing our vigilance and making some pretty tough decisions. In the grand scheme of things, though, these temporary impositions will be worth the health and safety of my family and community, not to mention my own peace of mind. 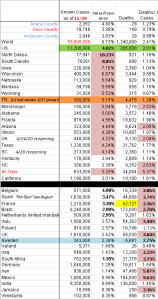 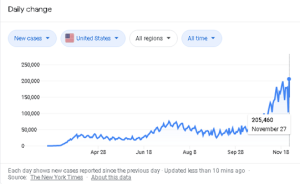